For a while, it wasn’t clear whether or not Tigers Jaw would still be a band today. In 2013, with studio time booked for the Philadelphia indie-rockers’ fourth LP Charmer, three of the band’s five members told Ben Walsh and Brianna Collins that they would be leaving Tigers Jaw. Those members, Pat Briar (drums), Dennis Mishko (Bass) and founding member Adam Mcilwee (guitar, vocals) would stick around to finish the record, but would depart thereafter. The future of Tigers Jaw seemed uncertain as the band released a statement saying that the tour they were about to embark on was “likely to be the last for the foreseeable future” and rumours were rife from fans, press and promoters alike that this was the end of the band.

Four years removed from that, and with new record spin (stylised in lower-case) out this month, it’s clear that reports of Tigers Jaw’s death were greatly exaggerated.

“We maybe should have worded it differently at the time,” Walsh admits. “Honestly, we decided right away that we were going to carry on. The night the guys said they wanted to move on from the band, Brianna and I were talking about how we were just finally ready to make the push toward being a full time band and that we shouldn’t quit. We never had the intention of stopping, there was just a miscommunication publicly.”

But deciding to carry on wasn’t even half of the battle.  Prior to his departure, McIlwee was considered the lead vocalist for Tigers Jaw and – along with Walsh – the band’s primary songwriter. That meant that there was now a huge gap to fill in the band, creatively; something that didn’t come entirely easily.

“In the back of my mind,” Walsh says, “I had to figure out how to generate more songs, which was pretty daunting. After setting a goal for myself to write ten songs that I was truly proud of, I started writing on January 1st of last year and in that first month I finished five songs. But after that I hit a wall and was sorta stuck.”

Soon after, Tigers Jaw were to go on tour with Basement in Europe, before Walsh and Collins then went on to play in the touring band for Petal (the project of fellow Philly musician Kiley Lotz on whose debut full-length Shame the two members had also contributed in the studio). That time would provide the space away from Tigers Jaw that Walsh needed to get the creative cogs turning once more. In addition, Collins was also ready to step up and contribute on a larger scale that she ever had before.

“During the Charmer process,” Walsh reveals, “I purposely left some empty space in the song ‘Hum’ for her to write some lyrics, so she ended up writing one of the verses. We decided that she should sing the lead parts too, and that ended up being my favourite song on that record. It showed us that we can utilise this other side of Tigers Jaw, so it was just the natural thing for her to then assume a role as another primary songwriter.

“She had never really written full songs before then, so I was really excited to see what she was going to come up with.”

A couple of weeks before heading into the studio, Walsh hit his tenth song (“I probably didn’t need ten in the end,” he says, “but it was a nice little personal victory”), which, along with Collins’ contributions, gave them the foundation for what would become spin.

Speaking today from his apartment in the artist-haven neighbourhood of Fishtown, Philadelphia, Ben Walsh is aware that Tigers Jaw are entering a new era with this album. Not only is spin the band’s first record recorded in their current lineup, it’s also the first they’ll be releasing on Black Cement Records; a Warner subsidiary curated by emo, indie and punk superproducer Will Yip (who, incidentally, also produced Charmer).

After spending the best part of a decade on independent label Run For Cover – on which the band were a flagship act – it’s understandable that there was an element of hesitancy in the decision.

“We loved working with RFC and it was amazing to watch them grow,” Walsh says. “But it felt like we had a very complete run on that label and so it was a good time to branch out. We weren’t shopping around exactly, but when we found out that Will was maybe working on what would become Black Cement, that was interesting.

“At first it totally seemed like a long shot. It took a lot of meetings and a lot of convincing to get him on board with the label. At face value, it was a major label swooping in and trying to do something that, to me at the time, it felt like they had no business doing. But as time went on we learned a lot more about them and saw that the people from the label have an immense level of respect for the world of music we exist in. They saw a lot of potential in it and had a lot of admiration for it and so they wanted to get involved in it.”

Yip’s involvement still wasn’t enough to seal the deal, however. When a band grows up playing in basements, the inherent ‘DIY or die’ mentality is a hard one to shake – to this day, Walsh takes care of all ‘managerial’ duties for Tigers Jaw.

“This couldn’t be grunge in the late 90s,” Walsh says of his initial concerns. “We couldn’t get involved in any crazy, restrictive contracts. But that’s not what they wanted. The label is run by real people who genuinely like all of the same music I like and who grew up in the same scene as I did. It’s a major, but it’s a very small and focused team who sat back and researched our scene for years before making a move. It feels a lot like being at an indie label still, just with the resources of a major label. I understand skepticism, because I had a lot of it myself, but Black Cement feels like a label being created for our world.”

And as press release-friendly as that may sound, the actions of the label back it up entirely. If it hadn’t been publicised, there’d be no reason to think that spin was being released any differently to any other record in Tigers Jaw’s back catalogue. The band have still had ultimate say in any and all creative decisions: the artwork was hand painted by Collins (“I didn’t even know she could paint!” says Walsh. “But she did a phenomenal job”) who has handled almost all of TJ’s art; the band put out a zine that offers an intimate look into the making of the album; and, most importantly, the music still sounds as though it was made with the same heart and honesty that Tigers Jaw have become known for. 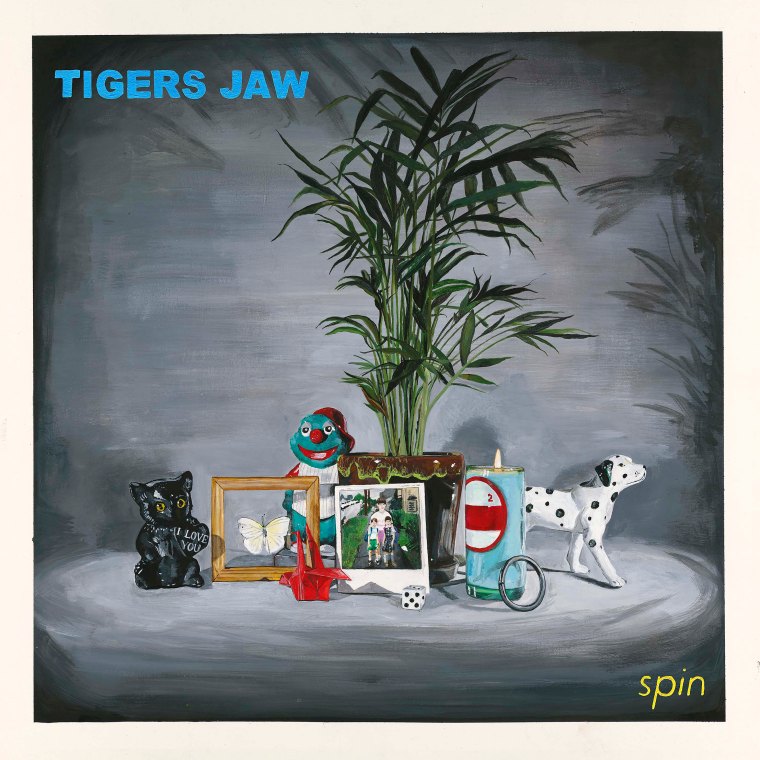 “There was no label pressure whatsoever,” concludes Walsh. “We had everything recorded and mixed before signing to them and expected them to have a bunch of notes of things they wanted changed, but they loved it and didn’t ask us to alter anything. spin was written, recorded and mixed exactly the way we wanted it to be – which is testament to how much they trust us.”

The result of all of that – the band finding themselves after losing key members, Collins growing into her new role as a songwriter, and being on a label that trusts them entirely – is the Tigers Jaw album that the band’s legacy deserves. And with major labels now taking an interest in their world (Basement and The Front Bottoms were signed to Atlantic’s Fueled By Ramen imprint prior to Black Cement’s existence), there’s no telling how far that legacy could go.

Posted on May 11, 2017 By kristydiaz Cover Story Posted in Cover Story, Features